Archbold School Bus In Crash; No Students Aboard 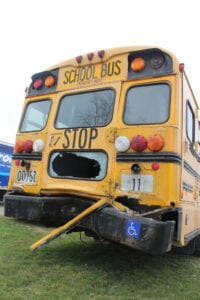 Archbold School District Bus No. 11 was damaged in a crash early Friday morning, March 26. There were no students on the bus at the time.

Just one day shy of the second anniversary of a crash between an Archbold school bus and a semi, another Archbold bus was struck by a pickup truck, Friday morning, Sept. 26.

Jayson Selgo, Archbold superintendent, confirmed Archbold bus 11, a handicap-accessible bus with a wheelchair lift, was traveling south on St. Rt. 66 and was stopped, waiting to make a left turn to go east on Henry Co. Rd. V, when it was struck from behind by a pickup truck.

Dan Benecke, chief of the Ridgeville Fire Department, said RFD was on its way to the Napoleon Wal-Mart to respond to a stabbing call when, at 6:48 am, they received a call for the crash involving the bus. Benecke said he called for Archbold Rescue to respond to the crash, but Napoleon Rescue released Ridgeville to cover the bus mishap.

Ridgeville transported Gauge Berton, 22, of Defiance, the pickup driver, to St. John Lutheran Church at the corner of St. Rt. 66 and US 6, where they met with a helicopter ambulance. Berton was flown to Mercy St. Vincent Medical Center. At this time, a condition report is unavailable.

Selgo said there were no students on the bus. In addition to the driver, a transportation aide was on the vehicle when the crash occurred. Selgo said the two were not injured, but were transported by Archbold Rescue to Fulton County Health Center where they were treated and released.