by Frank Bumb
Special to the Buckeye 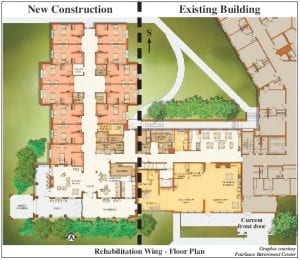 The Fairlawn Retirement Community has raised $5.5 million to fund an expansion of its speech, physical and occupational therapy center, along with a new 12-bedroom addition, or “neighborhood.”

And that is just phase one of a three-part plan.

Construction of the first phase, which is fully funded by the $5.5 million already raised, is set to begin in September and be completed in August 2013.

The new 8,340 square-foot addition on the east side of the existing nursing home will be paired with extensive renovations to the therapy center.

The therapy center will nearly triple its size, to roughly 3,600 square feet.

The addition and renovations must then undergo inspections by the Ohio Department of Health. Inspections are estimated to take about a month.

“We’re looking at the fall of 2013 to begin using the new neighborhood,” said Steve Ringenberg, chief executive officer of Fairlawn.

“Then, we want to run it for a year to ensure that it generates the revenue we hope it will.”

The first phase also includes 18 additional parking spots in front of the complex.

The second phase will see a 22-bed addition to the front of the complex, as well as a renovation of the center and north of Fairlawn.

New office spaces, a cafe, and nursing station will create another self-contained “neighborhood.”

“The goal is to eventually renovate all of Fairlawn,” Ringenberg said.

“We want to have everyone living within their own ‘neighborhood,’ where they don’t have to go somewhere else within Fairlawn to get to services.”

The third phase will be renovations to the south area of Fairlawn, including changing the double patient rooms into more private, split rooms.

Ringenberg emphasized the increased privacy and quality of life that comes from the arrangement.

However, there still will be at least one double room to accommodate a couple that wants to live together.

During the 11-month construction phase, there will be a bit of disruption to residents, as they will have to go to different areas for services.

But they will not be forced to move out of their rooms.

“There will be no drop-off in services, just where residents go to get those services (during the transition),” Ringenberg said.

The timeframe for the second and third phases is being left open to allow for flexibility.

“This is a long-term expansion to get us into the next generation of long-term care over the next 50 years,” Ringenberg said.