31 Entries So Far For Parade of Lights 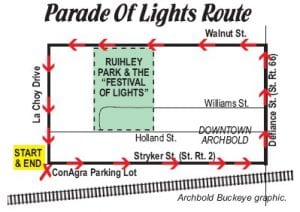 Rhonda Leininger, director of the Archbold Area Chamber of Commerce, said as of Monday, Nov. 25, there were 31 entries for the 2019 Archbold Parade of Lights.

That number might be a little tenuous. The parade has a history of late entries.

In fact, in years past, some parade floats simply show up that night at the ConAgra parking lot, where the parade is organized, and allowed to participate.

If that number holds true it will be the lowest number of entries since 2007.

In 2015, rain hit the village the night of the parade. It ranged from a light drizzle to a steady shower.

There were 30 entries that year, but the actual count of floats, decorated vehicles, and the like was 36. Twenty seven entries were registered prior to the parade.

Some entries brought more than one vehicle.

The weather may be a concern.

Michael Skipper, a meteorologist with the National Weather Service office in Syracuse, Ind., said, based on Monday information, a rain-snow wintry mix could hit the village around 6 pm.

“I’m not saying that’s exactly what’s going to happen. We might have to make some adjustments” to the forecast, he said.

Skipper anticipated temperatures will be above freezing during the day, but fall to freezing levels overnight.

Winds are anticipated to be light, from the east.

Leininger said supplies for popcorn and hot chocolate have been purchased in preparation for the visit of Santa Claus to the Archbold fire station, which starts at 4:30 pm.