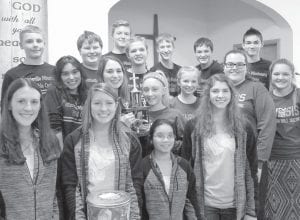 At the halfway point of the Bible Quiz season, eight teams still have a good chance to win the season.

In the Sunday, Jan. 28 meet, three teams– “Sisters from the Beginning,” “Eastland Baptist; “Golden Rings,” North Clinton; and “Striking,” Pettisville Missionary– won all their matches, setting up an exciting second half of the season.

Leading after one round robin are “Quick,” Central and “Guards,” Pettisville Missionary, with 7-2-1 records. “Quick” members are Leah Beltran, Kate and William Nofziger; “Guards” members are Isaac and Joshua Norr, Samuel Ruffer and Hyatt Stamm.

Quizzing for the first time Sunday, Carson Bennett, of “Striking,” had the fun of quizzing out on the last question of his first match.