2008 Citizen Of The Year Credits Many For Community Success 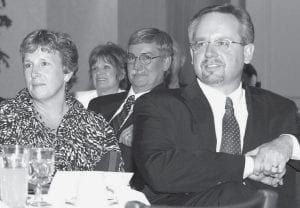 Jim Wyse, Archbold Citizen of the Year, and his wife, Janet, watch as their children address the crowd during the Archbold Area Chamber of Commerce banquet, Thursday, Nov. 6. While Wyse is a graduate of Wauseon High School, he told the crowd he had been baptized with Archbold water.- photo courtesy Royal Images

Jim Wyse, Archbold mayor and 2008 Citizen of the Year, recognized the contributions of many people during his acceptance speech.

Speaking at the Archbold Area Chamber of Commerce banquet, Thursday, Nov. 6, Wyse credited his family for a portion of his work ethic.

“I never thought anything of working nights and weekends at the pizza shop. That’s just the way we live. There are no set hours. You do what you do until the work is done.”

He also credited his in-laws, Harold and Joan Plassman, for helping instill a solid work ethic.

Wyse recognized Lawrence Short, who first asked him to serve on the Fulton County Senior Center board nine years ago.

During the monthly drives to meetings in Wauseon, Wyse said Short told stories of how he dealt with issues as mayor.

“I realized how vital the decisions made 60 years ago are to us today,” he said.

As mayor, Wyse said Short came up with instituting an income tax.

“People told him he would not get reelected. He said he didn’t care; Archbold had not built a street in 50 years.

Wyse said today, the Village of Archbold takes in $100,000 every week and a half.

Wyse spoke of the late Fred Witte, former councilman and director of the chamber.

“He said, ‘Jim, you need to take care of problems in private, so you’re not hanging out your dirty laundry.'”

But Wyse admitted, “Sometimes, we need to have discussions in open public session.”

In the summer of 2005, Wyse said Witte approached him and said he needed someone to follow him as head of the Community Improvement Corporation, Archbold’s economic development arm.

“Eight months later, he passed away.

“In March 2006, five months later, ConAgra announced it would close” its Archbold operation.

Through the efforts of the Archbold plant’s management and workers, along with help from the village, ConAgra corporate management reversed its decision. Later, the Archbold facility was named ConAgra’s plant of the year.

Wyse said the ConAgra shutdown meant cutbacks and layoffs for village water and wastewater department workers. He apologized to them, and said he appreciates the workers.

Wyse also talked about the reconstruction of downtown Archbold, saying it had been discussed for 30 years.

Now that the project is completed, Wyse said he has had the opportunity to experience pride in the project. He said he has given tours to other mayors from as far away as Van Wert and New Bremen.

Speaking of village council, Wyse said, “When it comes to economic development, this group understands.”

That was born out by the Northwest Ohio Educational Service Center. The village made an up-front commitment of almost a quarter of a million dollars to lure the office building here.

“None of this would have occurred without the assistance of the county. Thank you, Fulton County, for making sure positive things happen in Archbold,” he said.

Wyse also recognized his employers, Andres, O’Neil & Lowe Insurance Agency, “for allowing me to come and go. I often wonder which is my full-time job,” mayor or insurance agent.

Wyse said the Citizen of the Year title is often viewed as a lifetime achievement award.

He said he still has a lot of work to do, saying, “I plan to be here for awhile.”

Wyse said in order to accomplish the task the village faces in the future, he needs the support and prayers of the community.

The task, he said, is to solidify job opportunities for the next generation, “just as others have provided for us.”