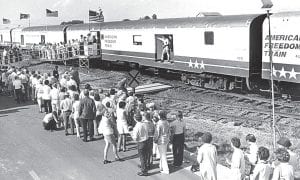 This photo shows people waiting in line to go through the American Freedom Train exhibit. More than 36,600 people went through the exhibit; some waited as long as six hours to board the train, which visited Archbold for three days in 1975. The train is parked on a “spur” track along Myers Road, south of West Barre Road. Today, the Sauder Woodworking Myers Road plant stands behind the railroad spur.– photo from Archbold Buckeye archives

Over a three-day period during the summer of 1975, an event occurred in Archbold that many remember with great fondness.

People came to Archbold from throughout the tristate area to stand in line for as many as six hours, in the heat and rain.

The American Freedom Train was in Archbold.

The Freedom Train was a revamped steam locomotive pulling 26 cars containing artifacts and memorabilia, from a 1756 edition of Benjamin Franklin’s “Poor Richard’s Almanac” to one of Abraham Lincoln’s stovepipe hats and a space suit that had been to the moon and back.

Joan Smith, Archbold, was there. At the time, she was pregnant with her youngest son, Justin, who was born two weeks after the Freedom Train visit.

“It was hot, alright, and it definitely rained,” she said.

Joan’s husband, the late Max Smith, was the chairman of a committee formed to attract the train to Archbold, the smallest town on its two-year tour of 138 cities and 48 states. 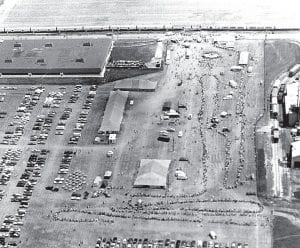 This aerial view shows the line of people waiting to tour the American Freedom Train exhibition. Despite high temperatures and heavy rain, it was estimated that as many as 50,000 people visited Archbold over the three days the train was in Archbold. Note how the line coils back and forth. Tents along the way offered local exhibits ranging from local quilters to a car driven by racer John Huffman.– photo from Archbold Buckeye archives

Max traveled to Washington, D.C., to lobby the Freedom Train organizers for an Archbold stop, reportedly calling on them twice a day.

Arrangements had to be made with the Penn Central railroad, then the operator of the line, to repair the spur tracks in preparation for the visit.

By the time it was over, more than 36,600 people had gone through the train and its exhibitions.

In spite of the heat and rain, it was the second-highest attendance at a Freedom Train stop.

Fast forward about 39 years, and Todd Schanuth, Irvine, Calif., is in the process of making a documentary about the Freedom Train.

As part of his research, he visited Archbold in 2003 and interviewed Max about the train.

Schanuth invited Joan to a Sept. 12-15 Freedom Train reunion at the Mott’s Military Museum in Groveport, near Columbus.

Reunions are held every other year; the next is in Portland, Ore., in 2016.

Joan attended the event banquet with Justin, who lives in Columbus.

She said many of those at the event were with the train from the beginning.

“They get together, talk about the train, and the different spots they visited.

“And they all remember Archbold,” she said.

“They were amazed at how many people came (to see the train), and how long they stood in line.”

And, she said, they asked about Archbold’s iconic restaurant, Ickey’s.

“Is that place still there that has the (painted) tiles on the ceiling?” a participant asked her.

Aboard the train were newspaper and wire service reporters and television crews.

Articles about the Freedom Train and its visit to Archbold appeared in publications around the nation and around the world, including the New York and Los Angeles Times, Chicago Tribune, China Post… even an English-language newspaper in Venezuela.

Joan said at the reunion, “It was wonderful to see those people, and wonderful to talk about all the good memories they had of Archbold.

“It was just great to see how connected all those people remain after all these years.”