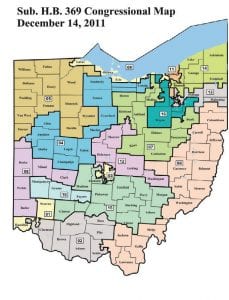 A decision by the Ohio legislature to adopt a compromise redistricting map will save Fulton County at least $25,000, said Melanie Gilders, deputy director of the Fulton County Board of Elections.

Every 10 years, the U.S. government counts the number of citizens and where they live.

By law the information is used to determine the districts of congressmen, known as redistricting.

However, partisan political parties develop the maps, and as a result, design the maps to favor members of their party.

“By design, it’s a political process, so you will always have partisan issues,” she said.

Earlier this year, Republicans, the party in power in Columbus, presented a map that favored members of their party.

Ohio Democrats threatened to bring the maps before Ohio voters through a referendum.

As a result of the action, Ohio was going to schedule two primary elections due to uncertainly over the map– one in March, and the other in June.

Last week, the two sides came together and settled on a compromise.

The new map has Toledo represented by two congressmen instead of three. Goodwin said Kaptur, who at one time represented Fulton County, benefits from the new map. Savings

With a new congressional district map in place, the two primary elections have been consolidated back into one, which will be Tuesday, March 6.

Statewide, the move is expected to save $15 million.

In Fulton County, Gilders said the move to one primary saves money.

“We didn’t sit down and figure it out, but it (one primary) saves at least $25,000 with the cost of ballots and general supplies, and that does not include additional staff time.”

The move to a single primary also opens the possibility of an August special election, she said. No Change Here

As a result of population changes, Ohio lost two seats in the House of Representatives.

While the redistricting maps may change representation in some areas, it had no impact on Fulton County.

Izzy Santa, spokesman for Bob Latta, U.S. representative (R-Bowling Green), said on any of the maps, Fulton and Henry counties have remained in Latta’s house district.

While Fulton County’s state representative has changed, the redistricting debate had nothing to do with it.

Currently, Goodwin represents Fulton County. After Jan. 1, 2012, Goodwin’s district is shifted, and Fulton County will be represented by Sears.

Goodwin, and others, believe the shift in Goodwin’s Ohio house district came as a result of his opposition to a proposal to sell or lease the Ohio Turnpike. John Kasich, Ohio governor, is backing the plan.

Goodwin said state house districts are determined by a reapportionment board, and are not part of the redistricting process.

Goodwin has announced he is not seeking reelection.