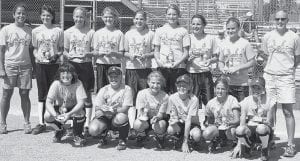 Archbold faced Wauseon in its first game, Friday, July 11. The Gold had beaten the Indians twice this season. Archbold scored five runs in the first inning and added six in the third and fourth.

The Gold faced Liberty Center, Saturday, July 12, at 12 noon. Batting first, Archbold scored five runs and never looked back, adding single runs in each of the next three innings and five more in the fifth to mercy rule LC 13-0.

Archbold’s next opponent in the finals of the winners bracket was undefeated Delta. In an earlier matchup, Delta beat the Gold 12-4.

Archbold scored once in the first inning and another run in the third, but Delta roared back with four in the fourth to take a 4-2 lead. The Gold had a big sixth inning, scoring four. Archbold held Delta in the seventh to win 7-4.

Fricke went the first five innings, giving up seven hits and one walk while striking out two.

Kern pitched the last two innings, giving up no hits with two walks and two strikeouts.

The win put Archbold in the finals on Sunday, July 13. Delta battled through the losers bracket to set up a rematch. Finals Archbold 5, Delta 3

Delta came out swinging and scored two runs in the first. The Gold answered in the second with two of its own.

Delta scored in the third, but that was all they mustered and the Gold took control as Archbold scored one in the fourth and two more in the fifth for a 5-3 win.

Delta put its leadoff batter on base in the seventh, but the next batter lined out to third. The final Delta batter hit a line drive to second baseman Cassidy Williams, who fired to first, picking off the base runner to end the game.

The Gold outscored its opponents 43-8 in the tournament.

Leading hitters were Newman and Gerig, two singles; Fidler, Coressel, Neuenschwander and Hesterman, singles. Leupp had two RBIs and Gerken, one. Great defense was played by the Gold throughout.

Cassidy Wyse, catcher, threw out many runners and held many more on base.

The Gold (9-3) team was coached by Kendra Stahl and Kara Buehrer.