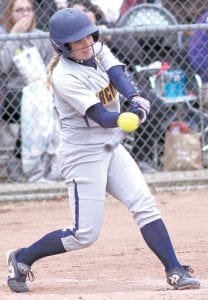 Left: Shelby Cline makes contact with the ball against Bryan, Monday, May 9. Right: Cassi Wyse pops the ball up early in the contest. Below: Brooke Hines catches a fly ball to center field for the first out of the bottom half of the fifth inning. The Streaks won 4-3.– photos by Mary Huber

Both teams entered the contest with 7-0 NWOAL records. It was winner-take-all for the league championship.

There was no scoring in the game until the top of the fifth inning. Andi Peterson led off with a single and Macey Rupp followed with a bunt single.

Brooke Hines bunted the runners over to second and third bases with one out.

Gabby Nafziger then laid down a perfect bunt and scored Peterson with the first run of the game.

Peyton Dickman and Cassi Wyse each had run-batted in singles to make it 3-0.

Payton Robinson then hit a pop-up in short left field, and Dickman alertly tagged and scored on the play to make it 4-0.

The Bears answered with two runs of their own in the bottom of the fifth to close the gap to 4-2.

Bryan added a run in the sixth inning and would have scored more if not for a sliding catch by Madison Kohler in right field to end the inning. 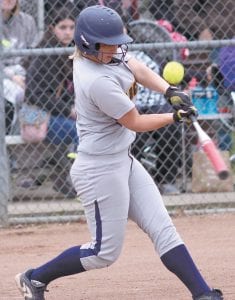 The Bears had a runner reach first base in the seventh, but Robinson fielded a comebacker to the mound and threw to first base to clinch the win.

Robinson pitched all seven innings and scattered seven hits while striking out three and walking none.

Wyse led Archbold at the plate, going 2-4, while A. Peterson, Nafziger, Dickman, and Rupp all singled.

“It was a real fight to the last out of the game,” said Joe Frank, AHS head coach.

“It wasn’t always pretty, but I am proud of the girls for hanging in there and getting the job done.

“Payton Robinson kept her cool on the mound and made some big pitches, especially with runners on base.

“I am just really happy for everyone on this team. They have all contributed to the success we have had this year!” 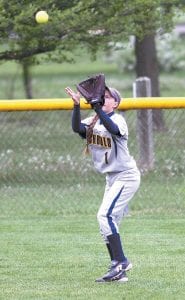