10 And Oh So Perfect 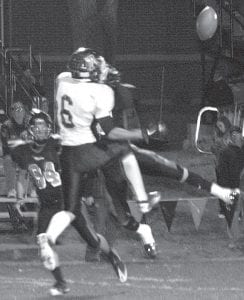 Above: Desmond Sleigh and a Tiger defender leap to catch a pass thrown by Blue Streak quarterback Garrett Morton. Sleigh scored an 85-yard touchdown in the second half to give AHS a 21-0 lead. Left: Danny Young runs for yardage. After Young picked up 15 yards on two carries late in the fourth quarter, Tyson Dietrich went on a 49-yard touchdown run to give AHS a 35-0 lead.– photos by Scott Schultz

For the sixth time in Archbold football history, the Blue and Gold finished the regular season with a perfect record.

The Streaks traveled to Liberty Center, Friday, Oct. 29, and capped off a perfect regular season with a 35-0 win.

“Our defense won us this game, plain and simple, because our offense played terrible,” said Bryan Miller, AHS head coach. “We completely looked out of sync offensively.

“There was a lot of pressure on these guys. We beat Patrick Henry in week eight and then come back and beat our arch rival Wauseon, and then to come here and play– this place always brings out the worst in us. We just don’t play good here, and that was the case tonight.”

The Streaks finished 10-0, and claimed the league title outright with an 8-0 record.

The Streaks have recorded 46 shutouts in the history of Archbold football. Before Friday, the last shutout was in 2009 against Montpelier when the Streaks won 63-0.

Archbold also set a record in points scored during the regular season. The Streaks scored 419 this season, breaking the previous record of 361 in 10 games set in 1983.

Archbold took the opening kickoff, but after rattling off 12 plays the Streaks came up short and turned the ball over on downs.

The Tigers fared no better. The two squads watched the first quarter pass with the score knotted at 0.

Archbold finally broke into the scoring column on a 12- play drive that spanned the first quarter into the second as Garrett Morton connected with Tyson Dietrich on a 5- yard TD toss.

Archbold added seven more points at the four-minute mark when Morton hit Noah Keefer for a 22-yard score and a 14-0 lead at the break.

Both teams came up empty on their opening possessions of the second half.

With 3:31 left in the third, the Tigers started at the 50- yard line on an 11-play drive. Sean Westhoven, who rushed for 115 yards, got the brunt of the work. Picking up 31 yards on six carries, the Tigers thought they narrowed the score to 14-6 when Kyle Miller crossed the goal line from 3 yards out.

But the Tiger touchdown was negated because of a holding call, and LC reset on the 13-yard line.

Westhoven mishandled the hand-off, and Archbold’s Zach Driver recovered the ball on the Archbold 15-yard line.

One play later Morton connected with Desmond Sleigh for an 85-yard touchdown, pushing the lead to 21-0 with 10:49 left.

The pitch and catch from Morton to Sleigh was the fourth-longest TD catch in AHS football history. The longest was a Gene Goeringto Jimmy Dunning 93-yard TD in 2007 against Bryan.

"The penalty brought it back; they fumbled, we scored the next play– that was big.”

Sleigh scratched the Tigers on their next possession when the Archbold senior picked off a Kyle Miller pass. The interception set up the Blue and Gold’s next score when Morton hit Dietrich for a 57-yard TD just six plays later and a 28-0 lead with 5:59 left in the fourth.

LC’s woes continued on the seventh play of its next possession. Dietrich recovered another Westhoven fumble.

Danny Young picked up 15 yards on two carries, taking AHS down to the LC 49-yard line. Dietrich put the finishing touch on an outright league title and a perfect season with a 49-yard touchdown run.

Then “we turned the ball over (again, when Miller was intercepted). It could have easily been 14-14; anything could happen.

“That is what we had to do, but unfortunately we didn’t do it. That’s the way the whole season has gone. Archbold played a great game, too, but at the same time we gave up some stuff that we shouldn’t have.

“For the most part we played solid defense all year. “To be honest, I think our league is a little weak this year. Hopefully in the playoffs we can prove we are better." (EDITOR’S NOTE: this quote was incorrectly attributed in the print edition. It was said by Rex Lingruen, LCHS head coach.)

“The defense kept us in the game, and we were able to get a couple of touchdowns at the end. We told the defense they had to win this football game for us. They needed to go out and stop Liberty’s offense, and they did.”