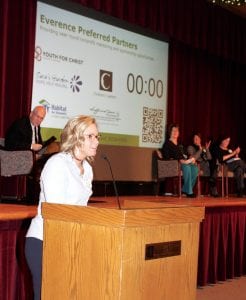 Shari Beck, foreground, addresses the audience during the #GivingTuesdayNWO event at Founder’s Hall, Tuesday, Dec. 3. In the background are, from left: Thom Stuckey, moderator; Lisa Williams, founder of It All Matters; Kathy Nofziger, general manager of Care & Share Gift & Thrift; and Laura Cole, executive director of Growing Hope Farm. The three organizations were among those featured. The 2019 #GivingTuesdayNWO event raised about $1.9 million.– photo by David Pugh

For the second time, #GivingTuesdayNWO has reported an astonishing amount of money raised for charity.

Shari Beck, a financial planner for Everence, said at the end of the #GivingTuesdayNWO event, Tuesday, Dec. 3, “we were at about $1.4 (million), and then with the match, it’s around $1.9 (million). We’re still working on the exact number, but that’s about where it stalled out.”

#GivingTuesday is an international movement establishing a day of giving following Black Friday and Cyber Monday, the traditional start of the Christmas gift-buying season.

Everence hosted a charitable workshop. “We had speakers on stage and we had a keynote speaker and accountants and attorneys talking about the best ways to give, and we invited nonprofits to have table space,” she said.

“But what I noticed was there wasn’t really anybody interacting with them.

“So when I was planning my 2018 (event) I thought, let’s just get rid of all the speakers and put the nonprofits on stage. And then it just kind of escalated from there.

“And what’s really fun to see last year and this year, is there was almost no room to walk in that expo area (where the nonprofits had the tables), because everybody was reaching out and looking at their tables and asking questions and learning more about them before the program started.”

But, gifts could be made to any nonprofit with a government 501(c)(3) accreditation. Donations made to organizations with a 501(c)(3) are considered tax-exempt.

Local businesses and individuals agreed to match up to $500,000 of the amount raised.

There were three sessions during the event at Founder’s Hall, with representatives of the featured nonprofits discussing their organizations with event moderator Thom Stuckey, former Northwest State Community College president.

Beck said all had good stories sharing the impact they’d had, “but the first set, I feel like really got the crowd excited right off the bat.

“I mean there were three nonprofits up there. One of them talked about a story where someone pretty much told them that they saved their life.

“And another was a story about a senior who wasn’t as active, and through the use of the arts, they’ve been able to be more mobile and more reactive.

“And then another one of the organizations… helped mentor people out of CCNO (Corrections Center of Northwest Ohio) and out of hard times, and they actually had their person there who, as of November, was one year sober.

“So they were just really cool stories just to start things off with a bang.”

Beck said the spirit of #GivingTuesday reaches beyond adults.

“There was a little girl at the event– she came with her parents, I don’t know how old she was, but she collected change to give that night, and I think it was close to 83 cents,” she said.

“She wanted to come up and give money to the organization she chose. That was really cool to see.

“We had another family who brought their daughter. She’s in high school, and I think she usually gets some money for Christmas.

“She asked if she could have some money early, and her parents didn’t know it, but she brought it that night. She listened to every difference maker who spoke, and ended up giving it away at the event.

“So her parents are super proud of her.”

Beck said last week she was getting the money together before writing checks to the various organizations.