Archbold Smacked By Storm; Power Out Until 3 pm Wednesday? 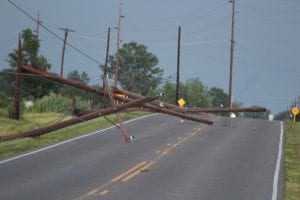 Utility poles down west of the Co. Rd. D slant railroad crossing. There were several reports of trees and poles knocked down by the Tuesday night storm.

As of about midnight Wednesday, July 3, Toledo Edison’s outage map was showing 2028 Fulton County customers out of power, including 1224 in Archbold, 557 in German Township, 226 in Clinton Township, and 13 in The Franklin Township.

In Archbold, the outage appeared to strike mainly north of the Norfolk Southern railroad tracks and Stryker Street. Some homes and businesses on the south side of Stryker Street had power; most on the north didn’t.

The traffic signals at North Defiance Street and Stryker Street, Holland Street, and Lutz Road were not working, along with the signals at the intersection of East Lutz Road, Clyde’s Way, and Co. Rd. 22.

But the signals at Stryker and Franklin Streets were working.

Reports say Pettisville, and Burlington Elmira were out as well.

Several roads were blocked by downed trees and power lines.

Poles were down on Co. Rd. D west of the slant railroad crossing. There were reports of poles down on St. Rt. 2 west of Co. Rd. 22, and a report of a tree down, blocking St. Rt. 66 north of Co. Rd. F.  Also, US20A was blocked by emergency vehicles.

There were several reports of two trees damaged or down.  Two trees were reported uprooted on Vine Street. A Facebook post reported a tree down on west side Goll Woods, blocking a road. There were several large branches down in the Manor Park area.

“It’s not a tornado environment,” he said.

It was, “typical July thunderstorms, with weak winds aloft. You get into summer, and the jet stream shifts into Canada. Crops transfer moisture into the atmosphere.”

Add to that temperatures in the 90s, and an unstable air mass, and  thunderstorms are triggered.

At midnight, Holsten said severe weather might not be over for the night; there was a possibility that more thunderstorm warnings would be issued overnight.

When asked what to expect for Wednesday, Holsten said, “That’s a good question.

“I think what will happen, based on what I see now, is isolated storms, with the earliest being around 2 o’clock (pm). The bulk may like up to your south,” he said.

“But I wouldn’t rule out isolated storms,” he said.

“You could probably copy that (forecast) for Thursday (the Fourth of July) and maybe even Friday,” he said–post 12:45 am Wednesday, July 3